Skip to content
Join 119 other followers
Follow My Dutch Diary on WordPress.com
Posted on September 23, 2018September 24, 2018 by Pat Jackson 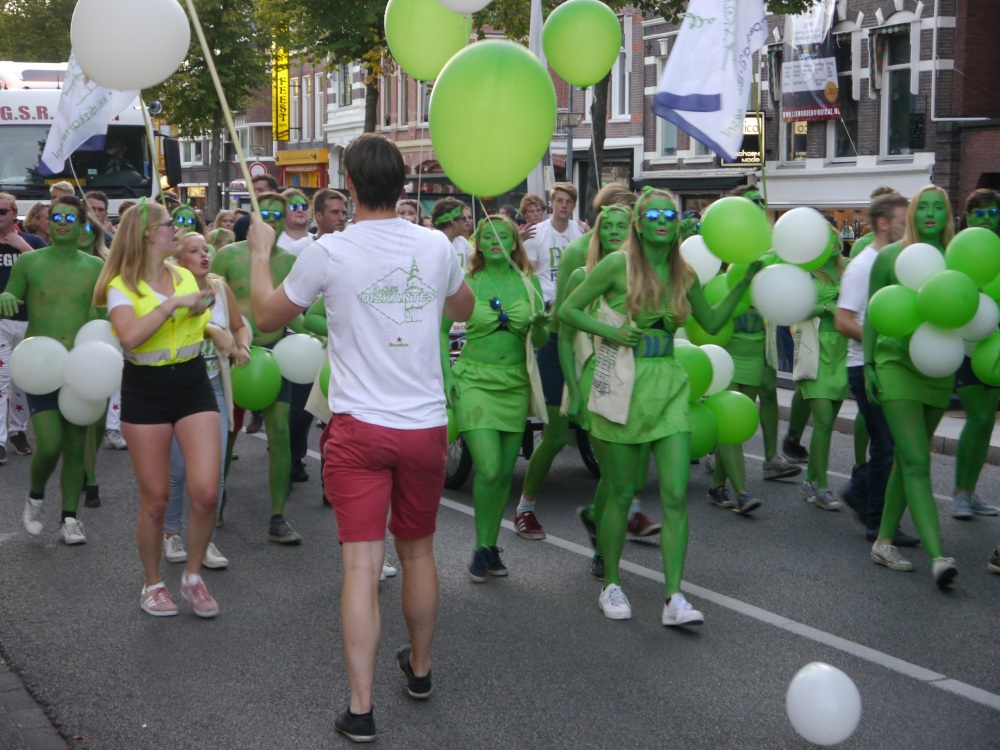 We knew THEY were coming.

Before we even arrived in the Netherlands, we understood that THEY were the reason that the city of Groningen sports the lowest average age of its citizens of all the cities in the Netherlands.  THEY are the university students that claim a full 20% of the population of this city of 200,000.

While there are several universities in Groningen, the flagship is the University of Groningen — known locally by its Dutch acronym of  ‘The RUG,’ and pronounced (of course) “Rrrrukkh.”   It’s ironic that the youthfulness of this city is driven by an institution (pictured below) that is four hundred and four years old!

The first signs that THEY were coming included a guy (below) moving a couch on his bike, presumably to help equip his student digs.  Then there was the constant stream of young people arriving at the train station with bags in tow.   Soon, the streets, which we had thought were already rather busy, were filled with the co-eds. 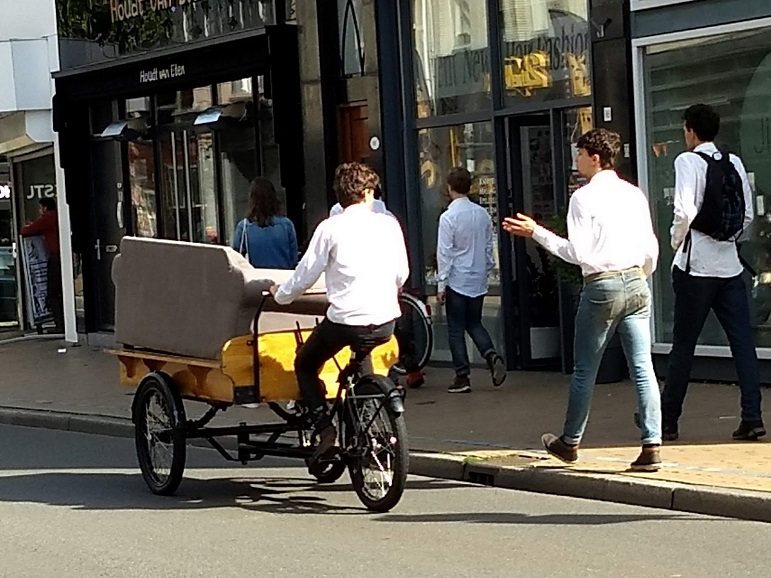 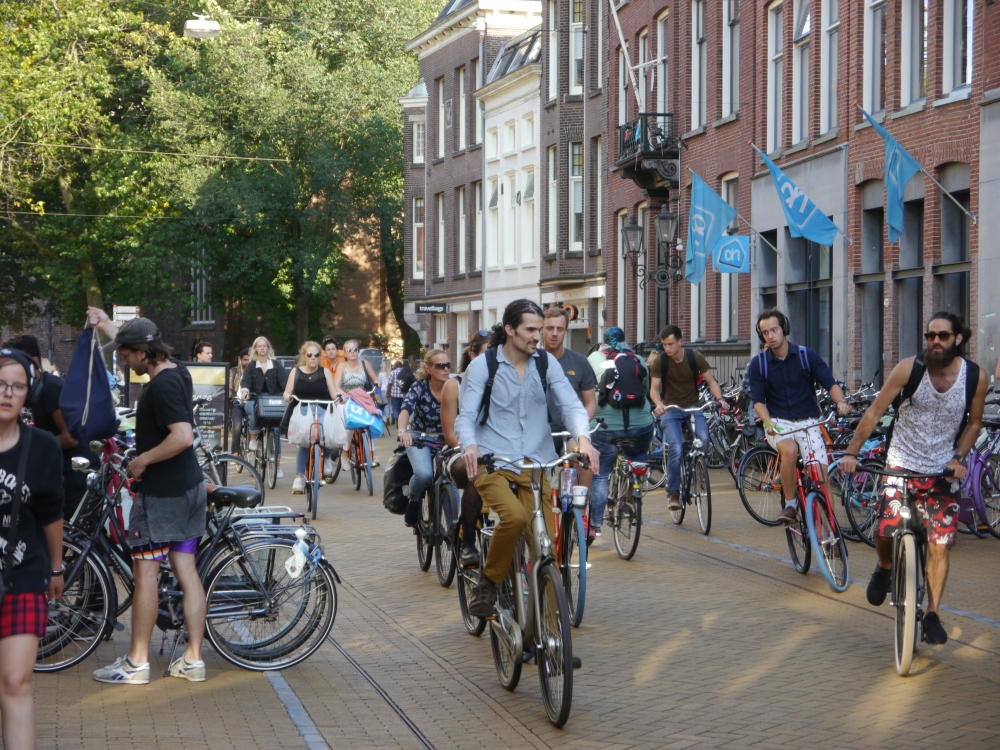 But then there was The Parade.   With music blaring, students representing all the major clubs and societies at the RUG danced, juked and paraded through the center of Groningen.

My favorite float was from the crew team! 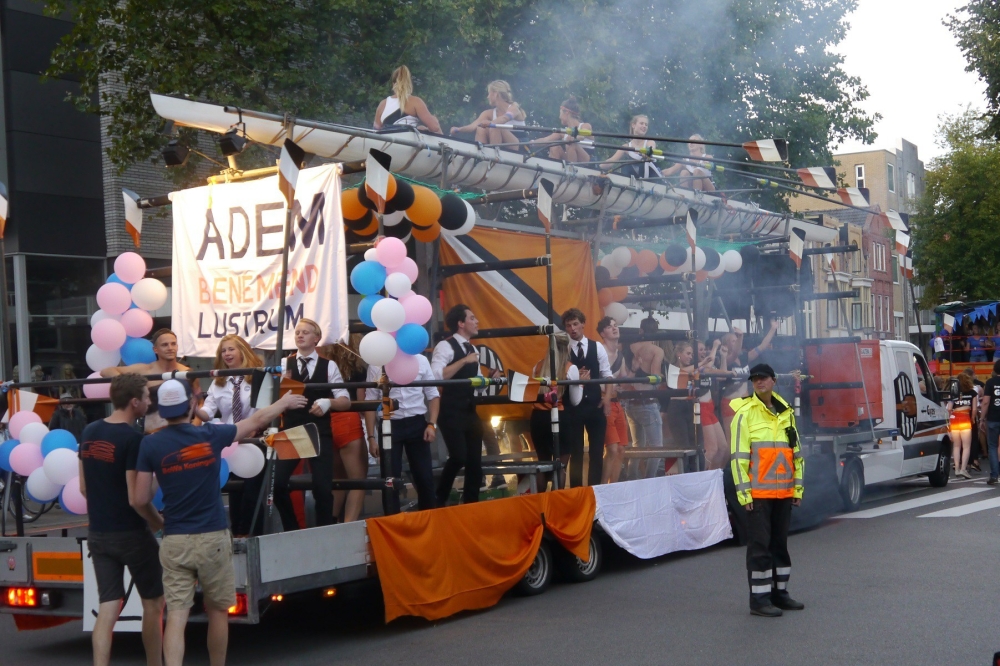 Then there was the tango club.

And straight from the bush in the Land Rover was the Dutch United Nations Student Association — fitting for a student body that claims representatives from every corner of the globe.

I was never exactly sure what club the green people belonged to — from the first photo in this post.  But to get a fuller sense of the pulse of the event, there’s this clip.  (You might want to adjust your volume.)

One of the largest of the student societies, a joint fraternity/sorority of the “I AM” society, posted these 2-story banners of their activities for this opening week of “KEIWEEK” for the students.

Now I’m a graduate of the University of Michigan.  During my years in Ann Arbor, I of course was single-minded in my pursuit of academic excellence.  However, I HEARD that there was something of a party scene on campus at times.  I’m not sure, though, that there were official  social events on the U of M campus that were SCHEDULED to begin at 2:00 and 3:00 in the morning! 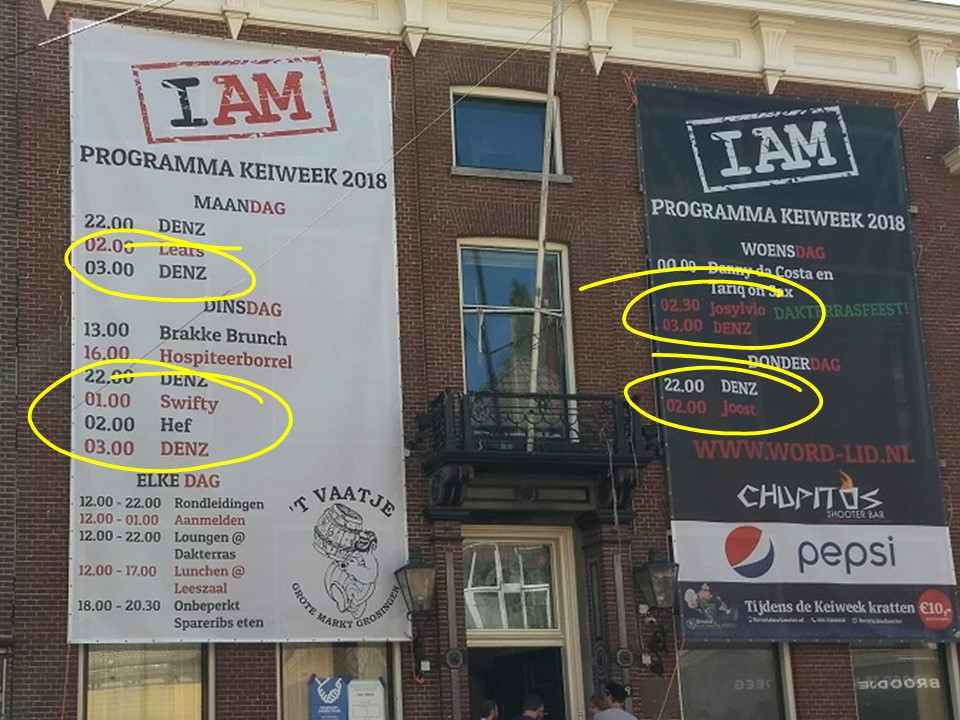 Of course notice that in the ELKE DAG (“every day”) schedule of activities, nothing began before noon!

Being in Europe has a different feel than the U.S. on many levels.  One of the accents here is on the amazing food and the embrace of beer and wine as part of regular socializing.  This carried over to the student week when I saw a Student Services van sponsored by Heineken delivering beer to one event!

And then the local HEMA department store (think of Target in the States) had this display along with all their back-to-school supplies!

I spent part of one afternoon interviewing 11 random students on the street.  Six of the students were Dutch, three were from nearby Germany, one was from Thailand and one was from Spain.  I asked them why they had chosen to come to college in Groningen and they all mentioned in one way or another what a great “student city” Groningen is.  Anna from Spain told me she came to have an “Erasmus experience” — an experience of exploring and learning (with a nod to the 16th century Dutch philosopher from Rotterdam).  Anna also mentioned that her parents in Spain wouldn’t have to worry about her in this safe city.  For Michael from Germany, the best thing and the hardest thing about going to school in Groningen were the same.  “It’s great that there’s so much to do and experience;  but then you have the challenge of choosing what it is you want to do and experience!”

With the student KEIWEEK over, the University of Groningen held it’s official opening ceremony for the academic year.

The event was staged in the mammoth Martini Kerk, which dates originally from 1225. Janet was able to secure tickets for Elyse and me, so we joined the throngs queuing up to enter the church.  I found the ceremony that followed to be extraordinary.

The event began with the traditional procession of the faculty wearing their academic garb.  Select students representing some of the societies advertised earlier in the parade processed in also, dressed formally according to the colors of their clubs. 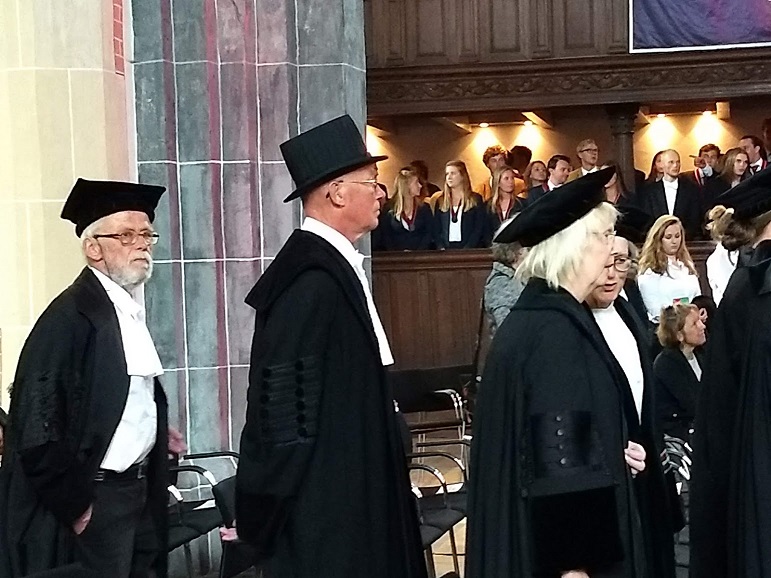 Then Professor Elmer Sterker climbed the stairs up into the elevated pulpit and offered the opening remarks.  After speaking about the broad mission of the university,

he focused on the RUG’s central commitment to advancing sustainability across all aspects of the university’s life.   Professor Sterker linked his comments specifically to the 17 point Sustainable Development campaign launched by the United Nations in 2015 under then Secretary General Ban ki Moon.   Large screens about the cavernous church displayed the graphic from the UN Sustainability Campaign.  So, we interrupt this blog to bring you a quiz!  I’ve hidden the labels from each of the 17 sustainability goals that are pictured below.  How many can you figure out from the drawings and symbols in each box?   The answers and a key for your Personal Sustainability Awareness Quotient (“PSAQ” — trademarked by this blog!) are at the end of this post!

This focus of the university on sustainability makes sense when you consider that (a) the Netherlands is on the front lines of climate change given that a significant portion of the country is below sea level, (b) the United Nations has a major presence in the country through the International Criminal Court in the Hague and (c) the Dutch cities of Groningen and Rotterdam were recently awarded a UN designation as host sites of the to-be-built Global Center on Adaptation.

All this led up to a quite remarkable presentation.

It began with a mesmerizing musical presentation by sound artist Sytze Pruiksma.  Using a combination of acoustic instruments and a whistle, he created, layer upon layer, a musical impersonation of birds — rising, falling, soaring, crying.  Mr. Pruiksma played for about 15 minutes, transporting us from within this church of stone and mortar to marshlands and the open air.

And then, Professor Theunis Piersma, a biologist, stepped forward to give a 15 minute lecture on a particular shore bird native to the Netherlands, the plight of which illustrates the growing impacts of climate change.  The stunning thing is that Mr. Pruiksma continued to play all the while Professor Piersma spoke.  Lecture and music were linked, intertwined.

After Professor Piersma concluded his remarks, he sat down, and Mr. Pruiksma played for another 10 minutes — carrying the bird calls into peaks of desperation until, among the centuries old stone of the church, all was still.

I don’t know if I’ve ever experienced such a presentation, marrying in such a dramatic way the linear path of logic and lecture with the wandering, soaring sounds of birds borne on the wings of melody.

After a poem by the university’s poet-in-residence and some other remarks, the opening celebration for the 2018-2019 academic year came to a close.

All of this brings me back to those green people in the student parade.  Who did they represent?

Perhaps, in their green-ness, they were embodying the significant commitment to environmentalism and sustainability that is of such evident importance to the university, the city of Groningen and the country at large.

Or, then again, maybe they were just members of the Heineken club.

P.S.  Now for our quiz!   The answers and your Personal Sustainability Awareness Quotient rating key are below . . . 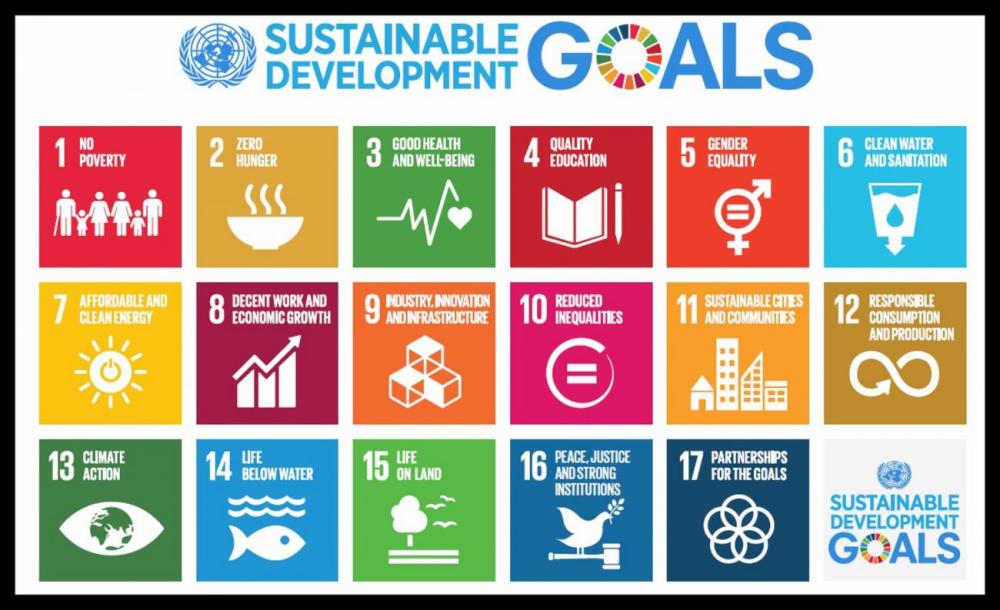 How many of the Sustainable Development Goals did you guess right?  Find yourself on the PSAQ scale below:

3 – 5 right:    I’m somewhat familiar with the concept of recycling

View all posts by Pat Jackson